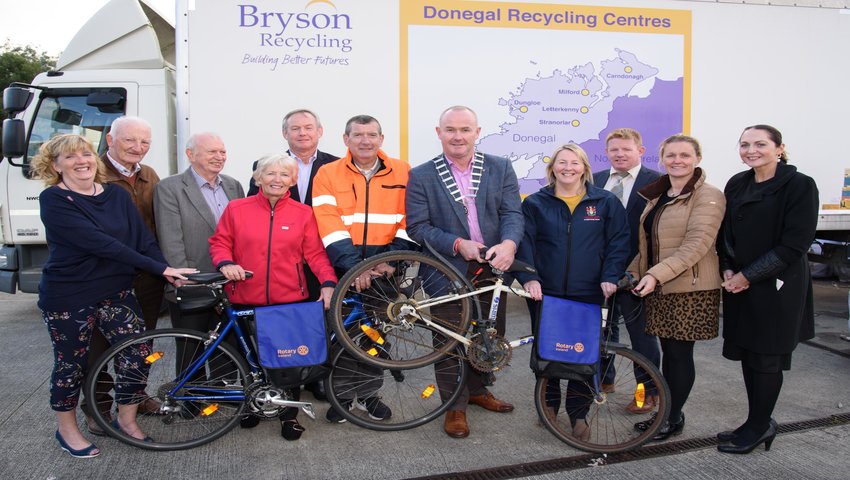 Letterkenny Rotary Club has once again joined forces with Donegal County Council and Bryson Recycling for this years School Bikes for Africa campaign as part of the national Reuse Month.

October is Reuse Month and once again households in Donegal are being asked to donate old and unused bicycles that can be refurbished for use by school children in Africa giving them the chance of a better life.

“We are once again appealing for donations of old or unused bicycles which can be handed in at any one of the Councils six Recycling Centres in Dungloe, Carndonagh, Letterkenny, Milford, Stranorlar and Laghey” says Padraig McGinty, President of Letterkenny Rotary Club.

“This year, bikes can also be donated to any of the 22 local Men’s Sheds projects throughout Donegal and we are also accepting childrens bikes as the project now benefits younger students from the age of four”.

Padraig McGinty believes that the inclusion of bikes for younger children will open up so many more opportunities, as children in Africa, especially those in rural areas, often have a very long way to travel to get to school, perhaps even walking up to 20km a day, and often in searing temperatures too.

“Our School Bikes Africa project is one which we are incredibly proud of.  Not only are we helping students get an education, we are also supporting the Irish Prison Service in the rehabilitation of prisoners and helping eliminate the need for the disposal of bikes into landfill sites as well.  We believe that the long-term effects of this project will have a huge and positive impact on the children and their families in Africa, and we are very grateful to the public, Donegal County Council and Bryson Recycling for their continued support’.

This is a national initiative and is now in its seventh year.  To date 3,000 bikes have been repaired through Loughlan House in Co Cavan and sent to The Gambia since the campaign started and approximately 400 bikes have been donated from Donegal alone.

Jimmy Keely, Assistant Governor at Loughan House Open Centre believes that this project gives prisoners a real sense of community and something to be proud of as they help to make a positive impact on the lives of the young people in Africa.

One inmate describes his involvement in the project saying “we are a real team and work together like a close family. It gives us a purpose, as five days a week we get to work from 8am to 4pm and we have even gained City & Guilds qualifications.”

Connie Gallagher, Manager with Bryson Recycling said they were "delighted to support the Rotary Club’s "School Bikes Africa” campaign by providing collection points at the six Recycling Centres in Co Donegal. At Bryson we are committed to ‘building better futures’ and where better to achieve this than gathering bicycles for school children in Africa."

Donations can be left at any of the six Bryson Recycling Centres in Letterkenny, Dungloe, Milford, Carndonagh, Stranorlar, Laghey or at any of the 22 Men’s Sheds projects during opening hours from Saturday during the month of October.