The Big Interview with Eric Randall, Director of Bryson Recycling

Please see below The Big Interview with Eric Randall, Director of Bryson Recycling, that was in the Belfast Telegraph on Tuesday 16th October. 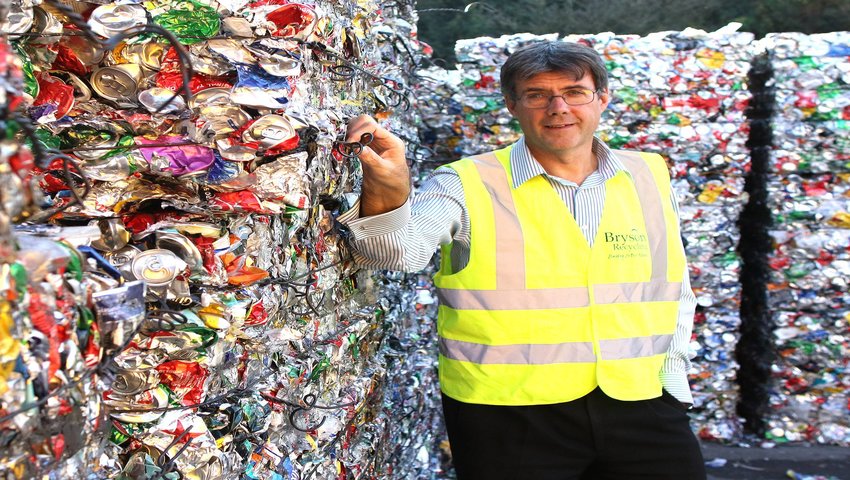 Eric Randall, director at Bryson Recycling, takes his work home with him. He says his 25 years at the recycling social enterprise has been more than just a job. It's a vocation.

"I cycled to work this morning and I have solar panels on my roof," he says, reaffirming that commitment.

A keen birdwatcher, Eric says he's always been interested in nature and the environment. And if he wasn't running the recycling enterprise here that posted a turnover of £13.5m last year, he'd be the warden of a nature reserve.

"The programmes that show chicks starving on the beach and eating small pieces of plastic instead of squid, that really connects with me. I'm watching those birds and I think their quality of life is important to our enjoyment of life. Wildlife and nature is in my blood," he says.

Born in Durban, South Africa, Eric relocated to England with his family when he was eight years old. A string of moves around the UK concluded with the Randall family of five settling in Brighton.

Eric went on to study environmental science at university in Bradford. It was a course that set him up for one final move in 1993 to Northern Ireland where Bryson Recycling was being launched.

And today he is at the helm of a team that has revolutionised the way Northern Ireland processes household waste.

When Eric joined the enterprise on the Ormeau Road in Belfast 25 years ago, it was just about to embark on a campaign that would seek to change the mindset of consumers here.

"I came in to set up Cash for Cans, a scheme that started out with three Government-funded trainees," he says.

"It saw vans parked in supermarkets where consumers would receive a penny for every can they recycled. It was a popular project and got a huge amount of backing.

"But then it became apparent to us that we had to do something different to encourage recycling because aluminium was getting light and it was harder to get cash for it because the price was fluctuating," he adds.

Mounting pressure to find alternative means to boost recycling and to meet incoming EU laws meant Northern Ireland had to act fast to shift its recycling psyche. And Bryson was the firm that helped local councils here achieve that.

"There was a lot of activity happening elsewhere in the UK and EU directives were coming through and they were going to impact on us, so we were able to get a grant and carry out a feasibility study on how household recycling could be introduced."

The study took place in the year 2000 after which a trial began. It was a door-to-door collection service, a pilot kerbside pickup scheme that began servicing 8,000 households using electric vehicles.

"We were really ahead of ourselves," says Eric, referencing those alternatively-fuelled vehicles. "I apologise to all those drivers on the Ballygowan Road for the delays we caused. They were a bit like milk floats which are designed to off-load weight whereas we were picking up weight so we couldn't have gone over 20mph."

Those vans may have presented a challenge for the trial but in no way did they impact on the success that service reaped.

"As a result of those trials in 2004/05, when councils realised they had to do something, we picked up contract after contract. We won all the early door-to-door services and now we run a plant that separates and processes that recycling," Eric says.

Those early initiatives have made Bryson Recycling the largest social enterprise recycler in the UK today, employing more than 280 staff.

And the company now delivers its services across all of Northern Ireland, parts of Donegal and North Wales.

It services 1.8m households and collects recyclables from more than 500 businesses and schools here.

Over its lifetime it has recycled more than 675,000 tonnes of materials, not just aluminium.

Bryson can cater for various types of household recycling materials, with the most recent trend seeing an increase in plastic reprocessing.

Eric says that on a daily basis its Ormeau Road base processes 30 tonnes of plastic, which is packed in 350kg cubes that are piled at the site in nouveau art-like bales. He paints a picture to describe the vastness of what NI is now recycling daily there: "It would fill one-and-a-half 40ft articulated lorries per day."

It's a major step forward from the days when households had to receive payment to encourage recycling and that's not only thanks to accessibility to services but campaigns and media that have highlighted the damage household waste is inflicting on the planet, Eric informs. These include the critically acclaimed Blue Planet television programme, narrated by Sir David Attenborough.

"That show increased awareness about plastics and it encouraged people to recycle more and offered us the opportunity to boost our recycling rates.

"There is only one other time that I can recall when something coming out of advertising or media had such a profound effect on the general psyche of recycling.

"After Blue Planet aired we saw the amount of plastic we recycled jump up by 25%. When you convert that, it's more than 200,000 items every day. And today I think now people inherently feel sympathetic towards environmental issues."

Among Bryson's latest initiatives is its Kerbside Wheelie Box collection that allows for separation of a range of recyclable items, from paper and batteries to old hand tools and drinks cans.

Its mission today is also to champion a circular economy approach to recycling in Northern Ireland with more than 80% of materials collected going to local reprocessing companies, which sustains around 1,000 jobs locally. Huhtamaki, Cherry Pipes and Encirc all reprocess materials collected by Bryson.

This collaborative approach with three reprocessors and a number of councils adds more than £100m every year to the NI economy and Bryson has ambitions to increase this by a further 50% in coming years. It's revolutionary and, as Eric sits down with his recycling lorry-shaped 25th anniversary cake, we ask if he is happy with the outcome of a quarter century's work. Have Northern Ireland households done enough? Has recycling embedded itself enough in our lifestyles?

He reflects: "I think we should stop and acknowledge the distance that we have travelled already.

"There has been substantial improvement since we started but we are at a level where we ask what do we do next and I'm clear that there are huge steps forward that we can be making."

Eric references Bryson's recycling activity in North Wales as one to aspire to have here.

"The emphasis is switching from recycling to reuse. The way we handle waste is a significant contributor to climate change but it's easily fixed. Reusing materials rather than mining virgin materials is a carbon win.

"In North Wales we work with the council and Welsh government to establish a reuse shop on the site that we work on. The store sells a range of stuff, and actually high quality stuff, that has otherwise been thrown into the recycling.

Money earned from the reuse shop is directly donated to the region's local hospice which has partnered with the enterprise.

"The role of a social enterprise is to look and think 'is there a problem here and if so, how do we turn it around to maximise the social and environmental potential'?" asks Eric.

Among those responding to the latter question are companies like Lidl. It has announced plans to phase out black plastic packaging across its stores here.

Black plastic, Eric explains, is hard to filter out during the separation process at recycling plants.

That process relies on light technology to differentiate materials and black absorbs that light, rendering its function futile.

It's leading the way for others who have yet to follow.

But there's still some way to go and Bryson Recycling has "a couple of things cooking" to speed up that process.

"The simple reality is that waste impacts everyone and the environment. Our model ensures good environmental outcomes by ensuring that goods are recycled locally, livelihoods are supported and the economy continues to grow," adds Eric.

"The future of recycling must focus on the quality of material collected and their local economic value. The impact of our model stretches beyond Northern Ireland, with many areas across the UK adopting it. We are confident recycling will be taken to the next level and Bryson will continue to champion and shape the local circular economy model."