Richard Ramsey, chief economist at Ulster Bank, says that with increasing pressures on the health service and a scaling back of public spending, the third sector has a central role to play in delivering key services.

My Ramsey was commenting on the latest Ulster Bank and CO3 3rd Sector Index which shows that most third sector leaders (57%) expect the sector to shrink over the next three years, as funding and other pressures continue to impact on it. 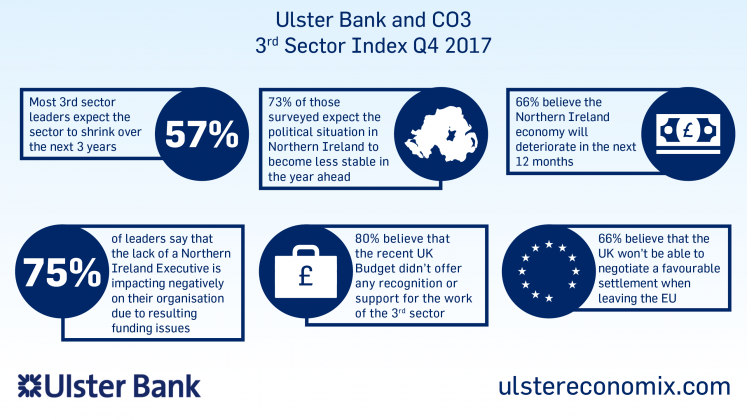 The Ulster Bank and CO3 3rd Sector Index is a barometer of Northern Ireland’s third sector, involving a quarterly survey of CO3 members who include the leaders of some of Northern Ireland’s largest charities and social enterprises. Services they provide range from care, to counselling and support, and training and development.

The latest index points to significant concern within the sector about the environment that they are operating in. More than 75% of leaders say that the lack of a Northern Ireland Executive is impacting negatively on their organisation due to resulting funding issues, a lack of decision-making, and uncertainty.

And 73% of those surveyed expect the political situation in Northern Ireland to become less stable in the year ahead, and 66% expect the economy to deteriorate. In addition, 80% believe that the recent UK Budget didn’t offer any recognition and support for the work of charities and social enterprises.

Nora Smith, Chief Executive of CO3 says: “The political and economic outlook for the 3rd Sector in 2018 is a challenging one, with the political deficit a key issue for our members, including a lack of confidence in the Brexit talks and how Northern Ireland is being represented in them”.

“Despite a challenging and unpredictable environment, the sector continues to focus on delivering value to society. Indeed, a small number of organisations are even experiencing an increase in their funding, and overall demand for services provided by the 3rd sector is rising. This highlights the need for and important role of our sector in society.  The 3rd sector plays a significant role in driving forward and leading social change, as well as adding to economic growth in our region, and it is worrying that such a high proportion of respondents expect a reduction in the overall size of the sector within the next three years.”

Commenting, Richard Ramsey, Chief Economist, NI, at Ulster Bank says: “The third sector is going through significant change as the funding landscape is transformed. This will inevitably mean some restructuring, consolidation and a potential refocusing of services. But with demand for some of the services that the third sector provides rising, what we don’t want to see is a reduced capacity to deliver the kind of key services that society and the economy needs more and more. With pressures in the public sector and significant spending cuts, the third sector can potentially provide a cost-effective solution. The onus is on the sector to restructure in an effective way. But there is also an onus on government to ensure sustainable funding for organisations that deliver badly needed services.”

John McMullan, CEO, Bryson Group, said: “We in Bryson Care have certainly experienced an increasing demand for our domiciliary care services, driven by the growing needs of our aging population (currently 15% of the Northern Ireland population is over 65 and projected to rise to 20% in the next decade).  However, the domiciliary care market is in crisis as a result of a disillusioned and reducing workforce.  Urgent political and funding decisions regarding rebuilding this sector and workforce are critical if demand and need are to be met and much needed job creation is to be achieved.”