Bryson Recycling, part of the Bryson Group, is nominated in the Social Enterprise of the Year category and, 25 years after it was founded Bryson Recycling is now a leading UK social enterprise provider of recycling services. From humble beginnings, collecting aluminium cans, it now collects and processes materials from 60% of homes in Northern Ireland, as well as eight recycling centres in Donegal and Wales. Chief Executive John McMullan talks innovative technology, emerging jobs and Sir David Attenborough.  Read the full interview with John McMullan below. 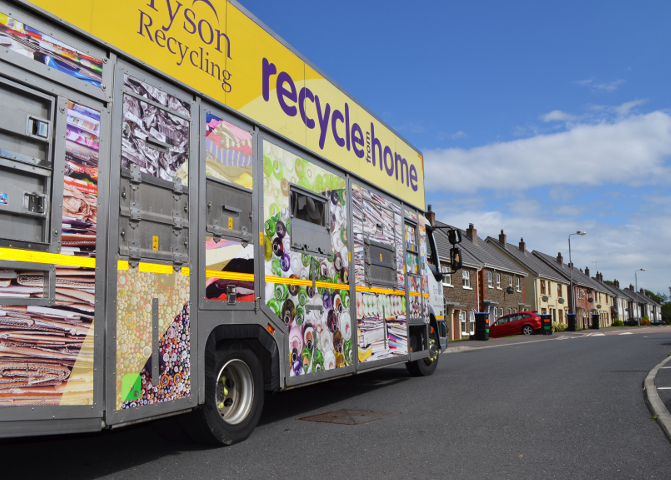 I am so proud of the team who sat down several years ago and, with the experts, designed a whole new range of technologies to improve the way we recycle. We changed the way people think about recycling. The team moved the discussion away from logistics to fundamentally changing behaviours and supporting people’s value-based changes.

We very clearly see great advantages to taking on new technologies. They offer us the opportunity to improve productivity across the economy. We need to use tech smarter. For example with recycling, it will help us to manage our routes better, we’ll see where vehicles are, determine the loads, find out what participation levels we have and learn what we have to do to improve them.

We’re also going to have to embrace emerging technologies because we’re working with that age group of people who are growing up in a digital era, who are very savvy with it and can adapt quickly. In fact, we’re looking at ways to leverage this – to show them how their IT skills and digital media skills are transferable to the workplace.

John is passionate about the long-term impact that social enterprises can have in society; in Northern Ireland, he feels Bryson Recycling is meeting a critical need in employment.

We see a greater sense of awareness of the importance of the circular economy, and indeed the role social enterprise may play in it. The model we’ve developed is capturing materials locally and remanufacturing them locally, so we squeeze all of the economic value out of it, and are able to create jobs in the community.

80% of our materials are currently being remanufactured in Northern Ireland, and we aim to drive that to 90%. We estimate that recapturing these materials delivers around £150 million of added value and as many as 1,000 jobs, at an entry-level position, which suits those who are either returning to work or engaging with it for the first time. This a big opportunity in Northern Ireland where we have a high percentage of economically inactive people.

We are finding many young people coming through who want more than a job. They want to know they are making a difference, and I think social enterprise is a model which enables people to do just that. When they join us, we want them to feel as much a part of it as anyone else and expect them to reshape and influence how we deliver our services. Brexit is something John is watching closely.

With around 10% of our workforce coming from Eastern Europe, yes it could have an impact onus. It’s very difficult to know what the future is going to look like,” he says. “It’s also compounded by the political vacuum here and we’re not seeing key decisions being made to move this forward.

Documentaries like this have changed the narrative completely. You just need to listen to mainstream media, and the issues about things like plastics no longer need to be explained to people. They understand it now. They are willing to behave differently; we just need to show them why it matters and what they can do about it, and then support them to do it.